This is more work than I thought.

This guy, Jack. He’s running all of it.

He’s got everyone under his thumb: Black, Bond, Burtis, Groom, Jota, Noircat, and even Misha.

He’s the kingpin, the top dog, the faceless puppeteer.

Show yourself, Jack. We know your game. We know the players. We even know your business.

Let’s go back to the beginning. Back to where it all started.

Bond gets a Russian mail order bride, Misha. No shame in that–she’s a fine gal.  Brings her to the US of A. Then things start to get mixed up.

Bond doesn’t know he’s taken Jack’s doll of the ball. So, he gets a message: find some replacements. See, Misha’s worth more than one hell cat.

Jack ships Noircat to Bond’s last known location. Puts a chip in his feline friend to help with his mission.

Bond’s supposed to send Jack a list of dames, stored on an old Night Driver’s chip for safe keeping. No one in noir106 should be suspicious of that, he thinks.

That’s where the hearts start flipping the cards, though–after Misha’s in the States and meets Bond and Groom. The gal falls in love with her husband’s friend.

Groom picks up a cat from the local shelter: Noircat. He tells Bond about his gift.

Shaken, Bond naturally turns the tables on his dame-for-dimes. Calls the black and whites and they shuffle her off.

Groom doesn’t know it, but he’s got Jack’s plant. But Groom can’t keep Noircat around. He gives the cat to Black for safekeeping. Black leaves. Goes “on assignment” somewhere for a week. Next thing you know, Jack’s calling up Jota trying to meet. Jota doesn’t share even the slightest information that he’s turned his back on noir106.

Groom’s caught up in this, but doesn’t pose a threat, so Jack passes him over. He goes for Burtis instead. Wants to know about Bond’s usual schedule. She won’t crack, so he starts sending her a message. Boxes. Hundreds of them start showing up at her door. She won’t budge. She’s a tough cookie to crumble. That’s where things get a bit more tricky and Jack starts to use his plant.

See, Bond’s not supposed to be broadcasting any kind of information, but Noircat’s chip hacks into Black’s local wireless network through some sort of electronic mischief and finds Bond.

Jack needs that information–he wants his list of dames. But Bond knows all about his scheme by now. So, he’s a loose end. Jack’s gotta find him or his whole operation’s blown.

That’s why Jack’s been popping up. Why Burtis was so troubled by Jack’s presence in the videos. Why Groom doesn’t actually know Jack. Why Black is surprised to hear his name on the phone.

He wants Bond silenced. Jota’s given him the data from Noircat’s chip, so he’s got his dames’ names, but can’t have any of this surfacing.

Unfortunately, I’ve lost my voice. I don’t know who took it, but I won’t be able to make a video today. Instead, I’ll write in order to share what I’ve learned.

Several days ago, Bond and Burtis both felt the need to defend themselves against our sleuthing abilities. Their methods were weak and far-fetched, we can’t trust either of them. There’s no way elves would use a sickle for making toys. There has been no news from Black. I looked through her videos again, trying to search for clues. The last video of her and El Jota seems to have been corrupted, because the audio is muffled by background noise.

I did some sleuthing, because I know that New York is a Russian Colony, to see if maybe Pennsylvania was one as well. Lo and behold, it’s the home of the Mid-Atlantic Russian Business Council. I also checked the census information, and there are some areas of Pennsylvania that are as much as a quarter Russian. What’s more, in the post he made, the video he linked is from Dr. Strangelove, which as everyone knows is all about the Russians.

Dr. Strangelove or: How I Learned to Stop Worrying and Love the Bomb, commonly known as Dr. Strangelove, is a 1964 satirical film about the Cold War in which an insane renegade general attempts to start a nuclear war and others attempt to avert it.

I don’t want to play ad-hominem, but this isn’t boding well for Bond.

As for Burtis, she’s much more difficult to pin down. I only have information from her videos. I did find some rather interesting things- in her Week 3 video, she makes some… interesting comments.

Let bygones be bygones, let water flow under the bridge… Burtis has a dark past that she wants to hide. A dark past with Jack. 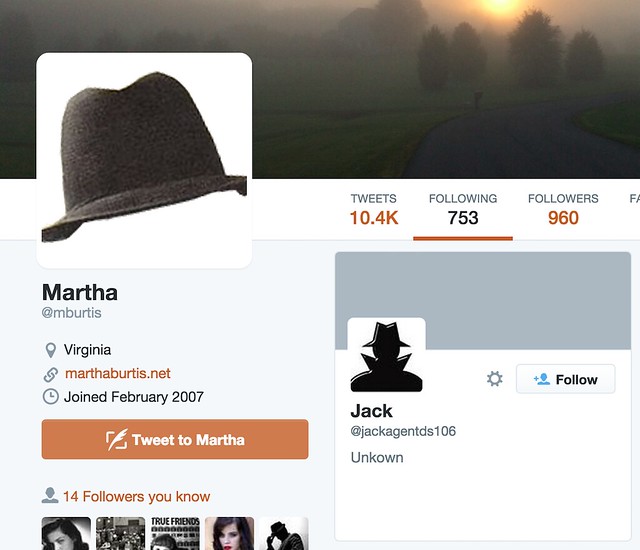 But why? What could be so bad that she wants nobody to look into her past? What could happen? And then, I realized the connection between Burtis and Jack. What could Jack hold over her to use as blackmail? What is the one thing that a woman wants to protect more than anything?

All of this brings us to Black. Is she the impartial judge, or the harbinger of evil? After all, Noircat is hers. She works for Burtis. She had or has close contact with Jack. It’s possible that she is being used as a pawn for Jack’s benefit, or she is the vessel through which Jack warns ds106 of what is to come.

I’ll wait for Donnie and Lilah to give me reports of what they’ve found this week before making any accusations. Once we compile the evidence, we’ll see the connections more clearly.

Guys, guys, guys! I just received a suspicious email thorough my work account. I did a screenshot for you, but the pictures didn’t make much sense to me. The return address was fake, and there was no subject. Not sure if this can be trusted, but after tirelessly investigating Black, and coming up with nothing, this is my best lead to go on. So I’m going to analyze the pictures over the next few days and let you know what I come up with. And I could use fresh pairs of eyes on this, so if you have spare time (I know you’re busy investigating you people) feel free to take a stab at them. If you need larger copies, I have them downloaded onto my computer, so shoot me an email if you need a larger size.

Jack may be gunning for him.

So many mysteries left to solve.

Earlier today I received a mysterious email from Burtis.

I’ve already briefed Donnie and Lilah on this case. Bond wants us to investigate some Jack character. (Told you there’s always a Jack). So far, we don’t have many leads. From the evidence Bond already compiled, it’s clear that Black and Burtis are hiding something. They must know who Jack is. But why was Burtis the one to contact us, then? Something doesn’t add up.

Where does Black work? What authority does Burtis have? Whose side are they really on? We’ll find out soon enough. Just like we uncovered the truth behind Obama’s evil spider bananas, Stirrup Trouble will soon know all about Jack. We’ll even know his allergies.

Keep on the lookout.

There had to be a reason for doing this. Maybe more of an internet presence for Stirrup Trouble. Bananas should be pleased about that.

Stirrup Trouble
Create a free website or blog at WordPress.com.